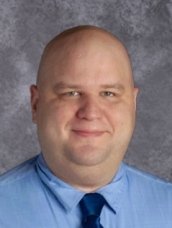 A musician for more than 25 years, Tim Horneman is Music Director at Divine Savior Parish in Downers Grove. There, he is the principal organist and pianist and directs three choirs, instilling his love of both traditional and contemporary music in singers young and old. He has served as an organist, pianist and choir director/accompanist at Catholic parishes through the Rockford and Joliet dioceses and still occasionally pops up at other parishes as a guest or fill-in musician.

This is his second year at St. Joe’s. He dedicates his teaching work to his late grandmother, a musician and math teacher, without whose intercession he could not be doing this. His goal is to introduce kids to the wide world of music, both sacred and secular, whether it’s Gregorian chant, Renaissance polyphony, classical music, jazz, folk music, classic rock, R&B, or music from the ‘80s, which is objectively the best music of all time. His hope is that each child finds something that interests them and gives them a lifetime of musical enjoyment.

When he’s not teaching or playing music, he enjoys entertaining his niece and nephews, bicycling, patronizing his local library, trying to get on “Jeopardy!”, going to organ concerts, reading issues of the “New Yorker” about six months after they come out, and watching reruns of the ‘80s-era “Press Your Luck”.